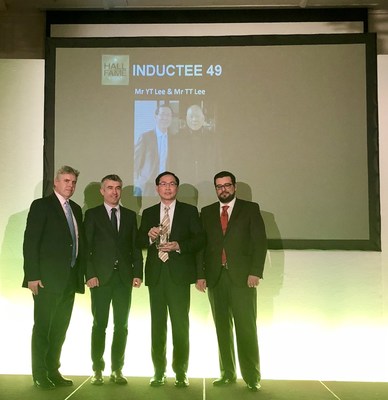 According to the WWA, the award recognises the Lees’ standing as two of the “whisky greats” and “the most iconic individuals in the industry.”

Damian Riley Smith, WWA CEO called Kavalan’s founders the “father and son team who have transformed the global whisky industry, who have shifted its frontiers through entrepreneur passion and innovation.”

He described what they had done as “quite truly magnificent in creating a new category, and putting Taiwan on the whisky map, where there was no whisky distilling history ever.”

The Hall of Fame is a permanent tribute honouring those individuals who have made a lasting contribution to the world of whisky and, was inspired by the top 100 greatest whisky figures in history who appeared in the 100th edition of Whisky Magazine.

King Car Group will launch beer, its latest business, later in the year.

Taiwan’s first whisky distillery has been pioneering the art of single malt whisky since 2006. Kavalan is aged in intense humidity and heat yet benefits from sea and mountain breezes and the spring water from Snow Mountain, which combine to create Kavalan’s signature creaminess. The distillery takes its name from the indigenous name for Yilan County, where it is based, and is backed by 30 years of beverage-making under parent company, King Car Group. It has collected more than 250 gold awards including 8 times world whisky winner and 4 times Spirits Producers of the Year and is available in 68 countries.  Visit www.kavalanwhisky.com/EN/main.aspx

FITUR 2023 Tourism Fair kicks off with participation of Syria

NATO Chief Calls For Unity Among Allies Amid ‘Differences’